Michelle Dedman has been singing jazz standards, blues, bossa nova, jump blues, and more in the northwest since she moved from Texas in 1987. She is known for her singing, but she is also a rhythm guitarist. With a repertoire of folk, blues, jazz that spans the decades from the 1920s to the present day, she teams up with lead guitarist Steve Moore and bassist Michael Proctor in the Michelle Dedman Trio for some hot tunes and cool grooves. Read reviews and hear samples of Michelle’s CD “Being Green.” 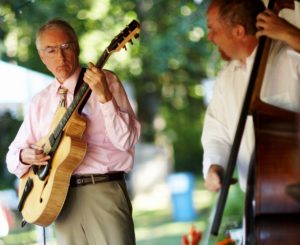 At the age of 8, Steve Moore heard his father play Wildwood Flower. He was hooked, and has been playing guitar ever since. In the seventies he played with local country and rock bands, and has studied under such luminaries as Neil Grandstaff and Christopher Woitach. 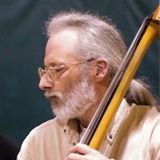 Michael Proctor cut his musical teeth on the violin, and began playing double bass a few years later. Guitar, harmonica and other instruments came along soon after, as he began playing folk music and rock. In the seventies Michael went from Willamette University’s Pit orchestra to being principal bassist in the OSU Symphony and playing in the Stage Band. From there, he went on to play with regional groups American Beauty and Lip Service. In the eighties, Michael was based in the Boulder-Denver area, touring with The Roadmasters (R&B) and working regionally with the Predictors (Folk & Bluegrass). In the nineties, he was based in Portland and worked with Ellen Whyte, before moving to Corvallis. Currently, Michael works with The Nettles, playing Celtic and World Beat dance music.